Did everyone see the GoPro footage of a grizzly bear in the news recently? It was captured by my colleague John Kitchin and features a young grizzly bear picking up a GoPro camera in its mouth and examining it while its mother and sibling watch on. It is an excellent example of their handiness, mental capacity and inquisitive nature. I am actually in the video as John was interviewing me on the bridge when it happened. 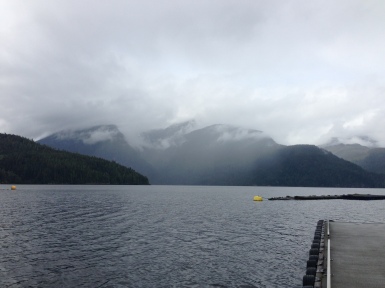 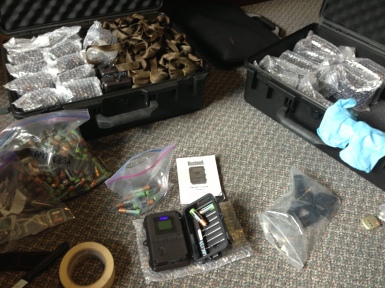 The research season for 2014 has officially started. Yesterday, I arrived at Knight Inlet Lodge (my field site base) and have spent the first day and a half unpacking and sorting out research kit. For the next 5 months, I will be in Knight Inlet, BC studying the grizzly bears and taking out groups of guests to view bears and learn about more them. As we flew in yesterday we saw two family groups of bears from the float plane, one group had two cubs that were wrestling in the sedge meadows. This morning one of the resident female bears in the area, named Lenore,  made her way up the shoreline towards the lodge with her two cubs and spent some time feeding in the intertidal zone. Lenore is very tolerant of people and appeared comfortable feeding and investigating the area for about 10 minutes, before she caught the scent of something back down the shoreline and slowly made her way back. When bears choose to feed close to the lodge like this we remain quiet and respectful while observing them. While females with cubs will always remain vigilant to a certain degree, behaving predictably around these bears allows them to feed in front of us in this manner without showing any visible signs of stress or anxiety. We have a visual barrier between us, water (we are on a floating lodge), but this would in no way be a physical barrier for bears, they are excellent  swimmers. Instead they choose not to swim over, but to maintain a respectful distance for their own safety; further reiterating the fact that bears do not want to come into conflict with people and will avoid it if possible to protect themselves.

Lenore is regularly sighted in the area and we believe she is approximately 12-years-old. We believe she may have been born in this area and probably dens on a nearby mountain as she is always one of the first bears that is seen in the spring. Its going to be an exciting year for Lenore and her two female cubs, they are old and big enough to soon separate from her and become independent, termed ‘family breakup’. This will usually take place when a male comes into the area and Lenore will choose to leave her cubs and mate. I have witnessed this with Lenore in one previous season (2011), when in the space of a few hours she went from being side-by-side with her 2-year-old male cub, to leaving him to follow an adult male bear. From then on, when her male cub tried to approach, she would charge at him and chase him away. This may seem extreme but she needed to teach him that it was his time to be independent and her time to concentrate on feeding herself and preparing her body for her next litter of cubs. We still do not fully understand how hormones regulate this change in behaviour from maternal to mating, or even what type of association a mother would have with her cubs after family breakup.